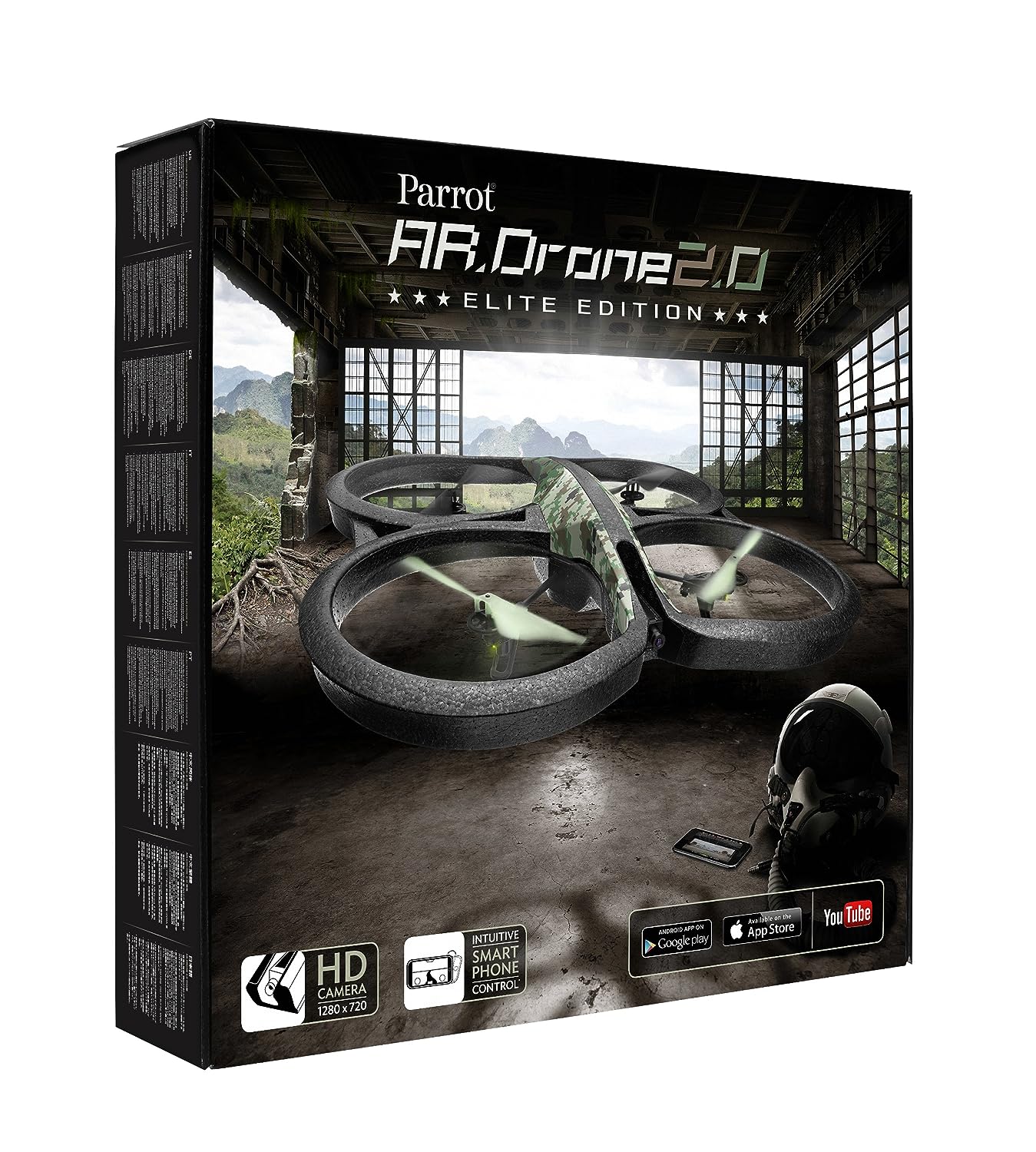 There are many different drones available on the market right now, and the Parrot AR.Drone 2.0 Elite Edition is definitely one that is worth taking a close look at for a number of reasons. Despite the fact that this drone is about four years old now, it can still compete with quite a few others in its price range. This drone is available for around under $200, and you get quite a bit for your money.

One of the things that separate the Parrot AR.Drone 2.0 Elite Edition from other remote control gadgets is that it doesn’t have a two-stick transmitter. A wireless network is used to connect this drone to an iOS device via the FreeFlight application. This application is used in the initial setup of the device, and it is used to completely control its movements as well.

There is a front-facing camera on this drone that produces HD video. There is also a lower-resolution camera that records video from the bottom, providing a straight-down view. The quality of the second camera’s video isn’t great, but that is somewhat to be expected from a secondary camera.

The front-facing camera on this Parrot Drone 2.0 sends its video feed to the iOS device that is being used, or a USB flash drive that is secured to the battery inside the drone. This camera records video in 720p at 30 frames per second, so you shouldn’t expect amazing resolution. One of the nice things about this drone is that the video the drone records can be played on an Apple TV or any other device that uses iOS.

Just above the live video feed you will see both the recording status as well as the battery life, so you know how much you have at any given time. If you use the batteries that Parrot provides, you can expect a flight time of about 12 minutes. When I used this drone with my iPhone, I saw a low battery warning appear around the 12 minute mark, though I was able to keep using it for a total of 15 minutes before it powered down completely. 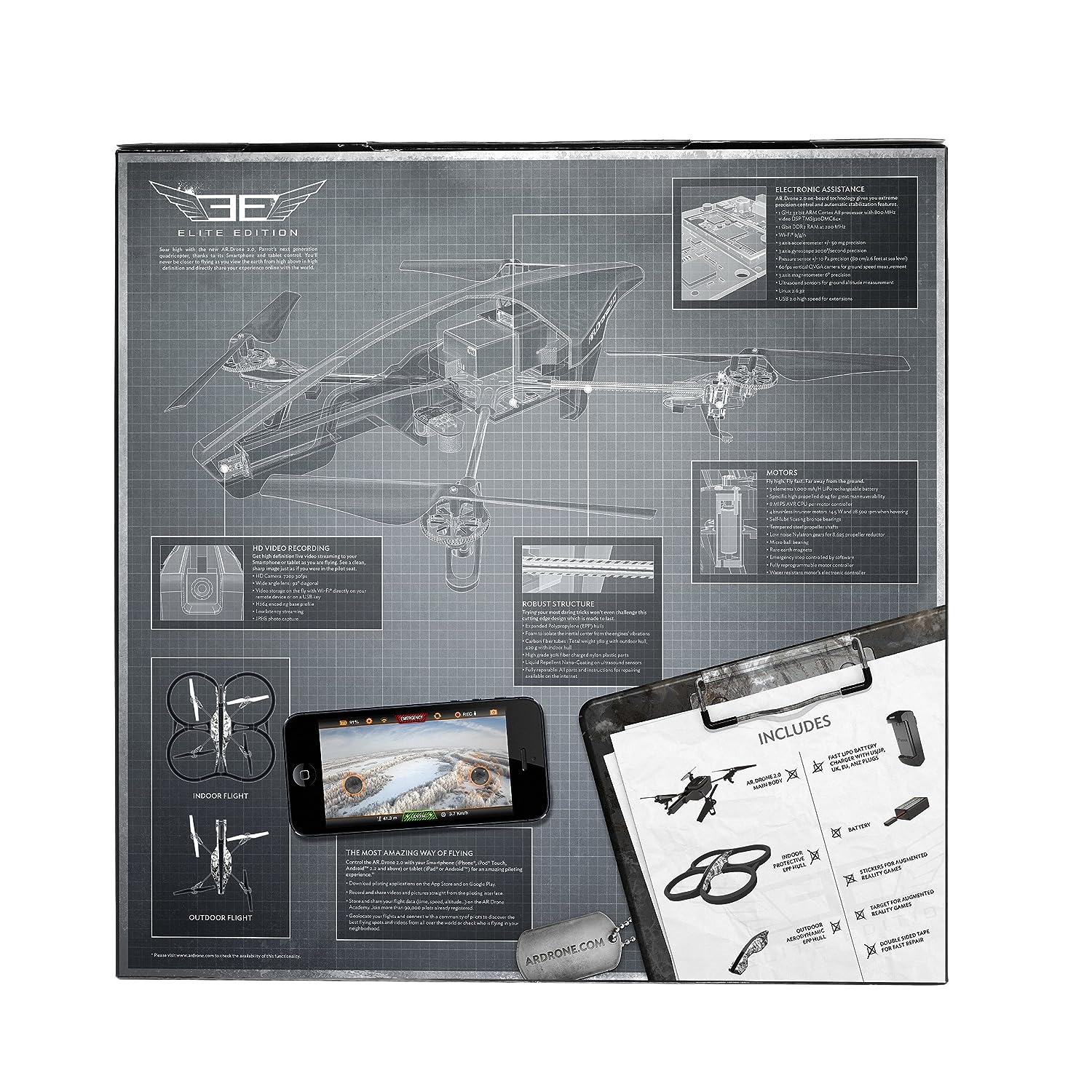 The overall build quality of the Parrot AR Drone 2.0 Elite Edition is very impressive, especially considering the carbon fiber parts that it is made with. One of the more impressive aspects of this drone’s build is the brushless motors, which are exceptionally durable and long-lasting. A lot of modern drones have a cheap, flimsy build, but that is not the case with this one. Overall, Parrot ar drone 2.0 is one very sturdy drone that won’t break easily. I’ve used many other drones in the past, and this is one is by far one of the sturdiest models available on the market right now.

This drone uses two different rotor configurations—a closed-rotor for flying indoors and an open version for flying outside. The indoor full in this drone is already installed, so no need to do any setup yourself. You also won’t have to worry about installing any additional blades, and there really isn’t a whole lot of work you need to do before you can start flying this drone. 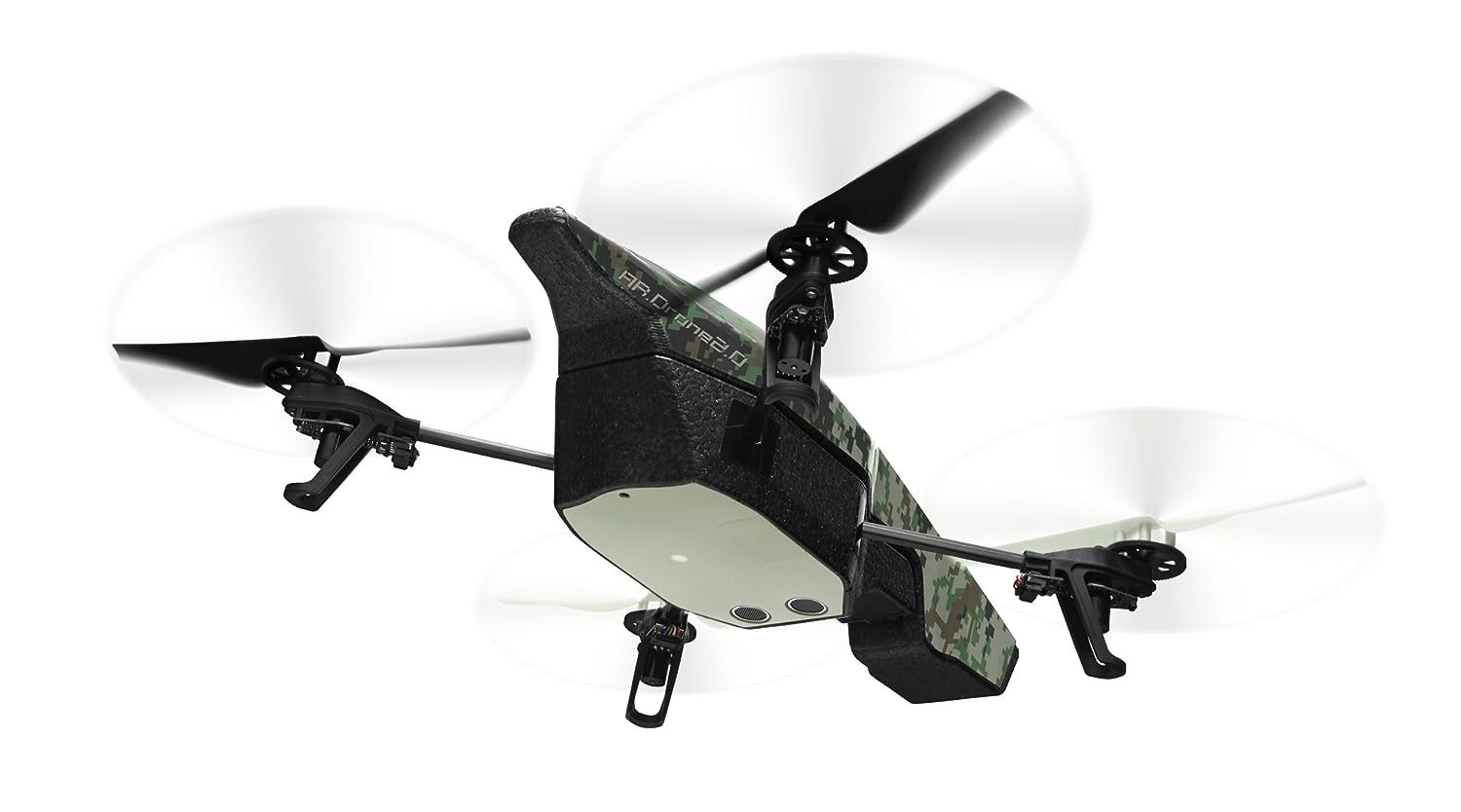 The iOS integration plays a big role in how the Parrot AR Drone 2.0 Elite Edition flies, much more so than many others models I have flown in the past. This is because this drone uses the iOS device for both viewing and control purposes. One of the things that bothered me most when unpacking this drone is that the instruction manual doesn’t really cover much in the way of how to actually fly the drone, so it can be pretty tricky when you’re first getting started.

You can control this drone with the virtual joysticks that you see on the touch screen, or you can the accelerometer on your iOS device. I did some flying with the accelerometer, but I found the joystick to be much more intuitive and easy to use overall.

I experienced some problems with the Flight Recorder feature, which offers a GPS module that can be used for mapping out a flight path. The mapping function doesn’t zoom in very well, so it can be difficult to create an accurate flight path to say the least.

The “Emergency” button that this drone is equipped with immediately cuts power and causes it to fall from the sky when it is engaged, which is a nice feature except for the fact that you can accidentally activate it when you are trying to start recording instead. Overall, this drone was pretty stable in the air and I felt like I was in control most of the time.

As previously stated in this review, iOS is necessary for controlling this drone. It wasn’t very difficult to set up the Wi-Fi connection. And although there was a little bit of lag with regards to the video because of bandwidth issues, the controls seemed to be extremely responsive as a whole. After I attached the Flight Recorder GPS, I planned a specific flight path without any issues.

Overall, the Parrot AR.Drone 2.0 Elite Edition is definitely worth looking into for those who are on somewhat of a limited budget and aren’t expecting a top-of-the-line model. While it’s true that this drone certainly has its share of issues, it flies just as it is advertised and without any major problems. The quality of the video that this drone produces is pretty good, but I have definitely seen better. The overall build of this drone is very sturdy, so I don’t expect it to break easily. If you are looking for a drone that flies fairly smoothly for a reasonable price, this is definitely one that you should take a close look at before making a final decision.